You know how in Orwell's 1984 we have always been at war with Oceania?  Well on my commute we've always had the road construction.  It's has no start and it has no end, just like that war with Eurasia we got going somewhere awhile back.  The road is being ripped up or pipe is being put down or an office building is being torn out and replaced by a bigger glassier office building.  Me I'm just on my increasingly grubby bicycle trying to get to work or trying to get home from work or (for variety) trying to get to the food store.

Road construction is not my friend.  It starts with a gigantic sign that says ROAD WORK which is always perfectly centered in the middle of the skinny little sorry-ass excuse for bicycle infrastructure lane that I ride in and that I fantasize gives me some little delusional protection from the cars.  So that's right out, the bicycle lane.

Next you see a sign saying "Lane Closed" and all the cars bunch up like cows lining up for a slaughter house and the more desperate ones go to the front of the line and moo in low anxious voices while the more patient cars stay in a fixed lane with a centimeter of space between bumpers so that the cows (I mean cars) that are queue jumping have to stand to the side.

Where does this leave the bicycles?

Not in very good shape thanks.  We sometimes get a helpful nudge in the shape of  BICYCLE LANE CLOSED.  Sometimes the cars are actually shunted into our lane because their own is being made smooth and lovely and so they use our broken sorry ass lane during the repairs.  Mostly we just fend for ourselves, sticking our arms out as we signal that we want to move away from the backhoe beeping along in our direction.

Once I saw a sign that said "Walk Your Bike" and I thought to myself "I'll walk my bicycle when you get out and push your goddamned car you dumb sow."

Some days there is a long line of cones with cars to the left and no road construction to the right.  I mean eventually they plan to do a little bit of a something but why bother taking down all the cones just for lunch break?  When this happens I ride on the construction side of the cones and I watch out for yawning holes and snicker at the cars the way the cat thumbs her nose at the dog when he's on a leash.

It's a special hoot when they shut down Bicycle Boulevard because unlike the cars who can detour around using another road, we only have this one street.  The result is that the construction workers put up barriers and we pause and then flow around them, like ants at a picnic.  Each day they make the bicycle deterrents a little more stout but each day we find our way around anyways, weaving around piles of gravel and crap and on and off sidewalks until the road returns to something like normal.

And then there was yesterday.  I'm hurrying along Charleston when I see that the entire road is blocked off and there are police everywhere.  The cars are detouring around.  I stop and ask "could I go along here?  On the sidewalk maybe?"  The cop explains that there is a gas leak and I will have to go around.  So I set out completing an extra circle that involves me heading up San Antonio in a tangle of angry detoured cars ad then having to take the left lane and getting beeped at and harassed.  Two other bicyclists arrived and huddled in my shadow.  We talked before the light turned green and agreed that we wished we could have just taken our chances with the gas leak.

I'm bicycling home from work and I'm thinking about a problem I failed to solve and my legs are going along in their mindless way and I am keeping an eye on my rear view mirror but I am riding on "Bicycle Boulevard" and feeling relatively safe about my situation.  The road is sadly narrow and it is is made far more narrow by cars parked on either side because even the so-called Mini --- the late model Mini that they sell in the US is as fat as any other car.  Compact.  Mini.  Hahahahaha.  If these parked cars were people they'd be dozy old senior citizens whose soft bellies flowed over thei elastic waistband of their pants.

Slim little bicycles pass easily in both directions, cars not so much.  I tell you that bicycling mothers and fathers can be spotted herding small shoals of children on little bicycles or in trailers as they make their respective ways home from summer camp or the playground so that you can understand that the road we are talking about here is not the Indianapolis 500 speedway although some of the cars going by make it feel that way.

I watch in my rear view mirror as a car comes up behind me very quickly.  I look ahead and see a second car heading towards me in the mindless way that cars travel when the next traffic light is not on the horizon.  The car coming up behind me is going very fast and I pull closer than is safe to the doors of the parked cars on my right.  The speeding car passes me way too close and way too fast and still accelerating and I am startled and unhappy but not nearly as unhappy as the oncoming car who sees the windshield of an approaching automobile and pees a little and has no where to swerve and so just bleats a whiny little tiny Volkswagen bug bleat.  Weah!  Weah!

I watch Fast Car ignore the bleating and progress up the street at speed and then pummel a 4-way stop with nary a pause and then repeat at the next 4-way stop.

I arch an eyebrow.  I pick up speed.  I consider giving this driver some verbal abuse because he is driving like a bag of dicks***.  It's easy to come up behind Fast Car at the next red light because even a Fast Car can only make so much progress on a tiny residential street dotted with stop signs and traffic lights and parked cars and strollers and bicycles.

Fast Car is now Stopped car.  He wants to take a right at this intersection but the road is narrow and his way (it is a he) is blocked by a car in front that is going straight and waiting for a green.  He honks angrily at the car that is blocking his way.  That car ignores him because he cannot believe that a someone would honk at a someone else for waiting at a red light seeing that it is after all the law.

I am quite close now.  As I watch, Stopped Car (nee Fast Car) gets out of his car (!!!) and strides angrily over (holy fucking shit!!!) to Waiting Car and starts shouting at Waiting Car.  Waiting Car becomes Terrified Car and hunches back in his seat and stares up at the driver of Stopped Car (who I now christen 'Nutsy Fucker') and does not roll down the window.  Smart boy.  The light blessedly turns green and Waiting Car hurries off and Nutsy Fucker runs back to get into their car and tear away doing 40 in a 20 zone.

Holy shit!  So so glad I didn't say anything to Nutsy Fucker when I had the chance.  What did Nutsy Fucker look like?  Old white guy with a straight across mouth in a tight thin line.  Normal other than the froth dotting his chin.  My my.  Someone needs to have their meds adjusted.

Moral of the story?  Don't stick your bicycle in the crazy.  Not worth it my friends.  Stay safe out there.


***special thanks to the Australian engineer who taught me this wonderful term, you rock my insult-world TW

Posted by Chafed at 8:48 AM No comments: 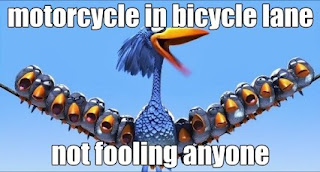 Don't be that guy.

Chafed
Posted by Chafed at 1:33 PM No comments:

I am bicycling home with the Contraption Captain.  We are on Sand Hill Road and there is a lot of traffic, not stalled, but not moving fast either.  We pass them on the right from our place of relative safety, the bicycle lane.  They pass us on the left when the traffic lights go their way.

Ahead of us a woman is live parked in the bicycle lane.  She's pulled over in a sloppy way or we might have had room to squeeze by her on the left, squeeze by her while we hope she doesn't decide to abruptly open her car door to pour out some old coffee.  There is no room to squeeze by however because she is entirely blocking our path and so we, the Contraption Captain and I, stick out our hands to say that we want to merge with the car traffic.

The cars are underwhelmed by our desire to continue on our way despite the roadblock one of their own has erected.  Contraption Captain is in front of me and he goes first into the breach, the abyss, and he gets a spot but an angry car slams their hand down on their horn.  Maybe they are honking at him because he pulled out.  Maybe they are honking at me warning me not to try and do the same, that their patience is thin from their 20 mph trek.

I stop my bicycle and then roll up to the driver side window of the car blocking my entire lane, the car who has stopped and shut down my only avenue of travel on this road.  It is a pretty young woman talking on a cell phone.  She senses me and looks up.

I'm glad she is not driving and talking on her cell phone.  I'm glad she is not texting and driving her car at the same time.  Doing that is dangerous to all of us.  I have to ask though, is the answer to not driving and talking on the phone parking in the one bicycle lane?  Would it be impossible to ask the person to stop somewhere that is not my only road?

I knock on her window.  She mouthes "Oh, I'm sorry."  I knock again.  Resigned she rolls down her window.  I say "if you had pulled over just a little more, I could have gotten by you."  She says "I'm sorry."  I try to think what it is I want to say and then gesture towards the bumper to bumper car and truck traffic streaming by within touching distance.  I say "does that look like a nice place to ride?"  She hesitates and then shakes her head.  She apologizes.  I nod and thank her for that and then I squeeze by her parked car and continue on my way home.
Posted by Chafed at 4:47 PM No comments: