Take this lane and shove it.

Some phrases are containers for bundles of information of varying sizes and shapes.

For instance "going to the airport" contains data about: parking your car, over-priced duty-free liquor, the super-shuttle, going through security, taking your shoes off, delayed and cancelled flights, being strip-searched and otherwise totally violated by a bunch of illiterate gorillas.

"Taking the lane" is only superficially about a bicyclist riding in the middle of a car lane just as "going to the airport" is on the surface about going to a place where they keep airplanes but actually contains far more nuance where by nuance I mean suffering.

If you unpack "Taking the lane" you get:  riding in the non-gutter part of the road, angry cars breathing hot wet alcoholic fumes down your neck while you pedal like a house burning down on Christmas, peeing the seat as some joker forces their way past you in the third of a lane that you are not dominating, being shouted at by random strangers, all this while being encouraged by the bicycle safety manuals that "taking the lane is safe" despite needing to re-up onthe anxiety meds each time you venture away from the gutter.

I am not saying "do not take the lane."  I do think it is a bit of a joke to think that bicyclists get to "take" anything when it comes to the roadways.  A more accurate phrase would be "borrow the lane please don't kill me omg!"

So yes, I am not saying that a bicyclist should not take the lane or even saying that it is unsafe or unwise to take a lane.  I'm saying "Stop acting as if bicyclists avoid taking the lane because we lack the brains to figure out that it is a good idea to do so."  We avoid taking the lane and we ride too close to the side of the road and too close to car doors because we share the road with a giant bunch of bullies and on any given day 20-40% of those bullies are in a bad mood and are not very happy to be paused even briefly behind one of those ridiculous little bicyclists.

My route is selected for bicycle friendliness and maximum bike lane-age.  The instances where I find myself "taking the lane" are few but mostly unpleasant.  In case #1 I have a short piece of road where the lane on my right is an on-ramp to the highway and the lane to my left is for going straight and the lane I "take" for a short period is also going straight.  A bike lane appears at th e next light and I pour right into that.  I always think that cars getting on the highway are not obstructed, and that cars wanting to go straight can wait briefly behind me or if they are in a hurry, use the lane on my left.  What actually happens is that several times a week a car follows behind me, way too close, and then pushes awkwardly around me and I scream like a little girl.
Posted by Chafed at 4:17 PM 6 comments:

same thing we do every night, Pinky

Today on the way to work.

1.  I saw one of my favorite bicycle people on Bryant Street.  He has this big peaceful sunny smile.  We always wave and wish each other a good morning or evening.  I've pretty much given up on being one of those types who spray rainbows wherever they go but that doesn't mean I don't appreciate it in someone else.
2.  I saw a bicyclist with matching purple shoes and sweater.  I mentally awarded her the prize for best-dressed.
3.  The Contraption Captain added a red LED light to the back of my bicycle hopefully making me harder for cars to ignore.  A blinky Valentine from my favorite recumbist.
4.  The fog took the edges of the houses and the trees.  It smoothed the world along including a few of my own rough edges.

It sits looking
over harbor and city
on silent haunches
and then moves on.

-Carl Sandburg
Posted by Chafed at 12:05 PM No comments:

Monday I had a busy day planned at the office,  some project work that had me amped in the low key way I get excited about figuring out all the angles and engineering something nice.  As I got younger child ready older daughter came and got me and towed me towards the door.  She had tears on her face.    Older daughter only cries under the gravest of circumstances.  I got outside and Contraption Captain had our cat in his arms.  Curi.  Curi who had spent the night on our bed sprawled and warm and then had eaten breakfast and then had gone outside had been hit and killed by a car who knocked him dead or close to it and then continued on it's way.

This I have not been able to write about but by today the misery of not setting the words down is like the grief of losing this cat and so here I am telling this story.

We acquired this cat in May, he came with our house.  His owner could not keep him at the retirement home she was moving into.  We were cat-less, ours had died after a long battle with cancer.  Curi looked like a Manx, he had no tail.  He had no tail because he had been hit by a car as a younger cat and the tail had been amputated.  Curi was an "easy" cat said his soon to be ex-owner.  He spent all his time outside.  He had no litter box.  He was allowed inside in the morning to eat and then went back outside.  We hoped for more because we love cats and slowly Curi  allowed himself to make his way into our lives.

We got him a litter box and he sniffed at that, surprised.  Afternoons and evenings experimented with stepping inside the house and looking around and then when the nights got cool he started to sleep on our bed.  He diffidently used the kitty box a few times.  He had a lot of personality.  He drooled.  If you scratched his ears it gave him this huge joy and his mouth would fall open and he would drool.  We introduced him to treats, strips of cheddar cheese were a favorite.  We had him de-wormed and de-flea'd and he tolerated it with patience and good humor.

Outdoor cats are at risk but keeping this cat indoor did not feel like an option.  If you did not let him out he would go and sit in this quiet desperate way on the tiles by the washing machine where he could breathe the fresh air best.  Outside he looked joyful always.  Lying in the sun beneath a bush by our door.  Sitting in the driveway waiting for us.  He was five and outdoors was all he knew, I thought and hoped he could be safe.  Hope is definitely not a strategy.

At Christmas he slept under the tree amidst the parcels.

I miss him with a deep and raw grief that taps into my feelings of not being able to keep myself safe on the roads or my kids safe or my husband safe.  The day Curi died I stayed home from work and Contraption Captain dug a grave for him in our yard, by our apple tree.  I wasn't able to bicycle to work.  I was so defeated.  I am so defeated.

A close family friend saw him in the road as she was driven to school that day and they did not stop so she would not be late.  I hate the way people drive on by.  More defeat.

Tuesday I got out my bicycle and pedaled into the office and tried to catch up on my missed work.  Wednesday and Thursday and Friday I pedaled in.  Some of the time I cry as I pedal because I feel so incredibly guilty.  The bicycling makes me feel a little better but good feelings are subdued.  He was a good cat.  In the end I just want to write down to him that I'm sorry, that I apologize, that we all miss him terribly.

I'm still a bicyclist but I feel the defeat behind my ribs as I breathe. 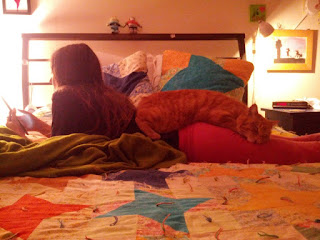