I love to race where "race" means that I never stray off my commute and I don't run red lights (you can if you want but I'm way too chickenshit for that stuff at my age) and mostly I just try and pass and "win" on the long straight-aways.

I've never found the words to really describe how much I love this, this pedaling as fast as I can, this being a middle-aged lady on an off-rack bicycle flying down the road swooping past the other commuters until I encounter a like-minded racer and we fight for the front place, sometimes one of us drafting behind the other.  On a good day we worker bees, we ordinary people form a pace line of sorts, skimming along the road like lithe little swallows on their way to Capistrano.

I love that stuff.  I won't say it makes life worth living (my family would be that bit) but it makes life so incredibly rewarding on a daily basis, this racing, this beating heart, these well-powered lungs.

What is one teensy tiny annoying fly in the ointment?

I guarantee you women are nodding their heads right about now, at least any woman who has been on a bus or subway.  The Wide Stance is a guy who sits like this: 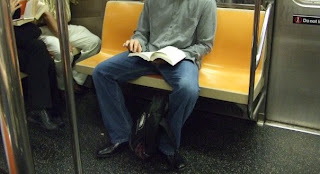 See?  See how the guy is taking up two seats and has his legs all spread out?  I mean we get it, we get that your testicles are the size of bowling balls and that they need adequate room for breathing and ventilation but we (the rest of the non bowling ball world) would really like to sit down sometimes and when you allocate a seat to each testicle it makes it that much harder for the rest of us to find a place to sit down and rest our weary dogs.

What does this have to do with bicycling and racing home on my commute?  A lot, it turns out.

Ever seen those teeny tiny hard roadie seats?  Mmm-hmmm.  Here's how it goes.  You and me are at a red light.  It turns green.  You take off in front of me and that's cool, I like a good fast pace.  But then you do it.  You slow down.  And you move way out to the left until you are within about two feet of the double yellow.  You can do this because we are riding on Bicycle Boulevard, and because of that we should be having a great time tearing up the road as we hurtle our respective work laptops home to rest for the evening but not you.  You slow way the hell down and then sprawl your bicycle across the entire lane.

You totally know I'm there.  I mean you were behind me at a red light ten seconds ago, remember?  I try and pass and you move further to the left.  I think about the right side (although I am a big believer in the right side) and you move over there and so I head back to the left and you are there.

Cmon, man!  Cmon.  You're inching along now at a bare 12 mph and I'm dying to make a run for it but you are all over this road who ever guessed a skinny bicycle could take up that much room!  And so I finally risk life and limb to pass way the hell over in the oncoming traffic lane and I do get away from you and your giant testicles, one for each side of the road and I continue on and totally drop you know why?  The real commuter racer types don't win because they block off anyone from passing, they win because they ride faster then the next person.  See how that works?

I got my whinges with girl bicyclists but I'm trying hard and I can't think of them ever trying to actively block someone from getting around them the way you do with your extra wide stance.

I went to New Mexico to visit family a few weeks back.  When I visit family I generally end up getting on an airplane and this makes me feel guilty because I do believe in climate change (clap your hands if you believe) and flying around to make visits is part of the general level of pollution.

I know know know I could bicycle to New Mexico.  Or Massachusetts.  In fact I would really like to do either of these rides.  Unfortunately I'd have to first quit my job and second strap my nine year old to the hood of my bicycle after mile ten followed by strapping my 14 year old to the rear fender of my bicycle after mile twenty or so and that really slows me down and the paternal unit in Massachusetts and the two in-law units in New Mexico are not getting any younger.

So at the moment I am in Massachusetts doing a lot of swimming and before this I was in New Mexico and this short story made inexplicably longer, by me, is about New Mexico.

First I saw exactly one bicycle in the four days I was there.  Second I spent more time than before with my very intelligent brother-in-law who happens to be a neurosurgeon and I finally got to ask him all of my questions about brain surgery which was great although I still think that if someone has a tumor it would be worthwhile to look into a cerebro-spino fluid replacement because the cancerous cells are there and if we could swap that fluid out with healthy fluid that would be good right?  Apparently this is totally out of left field and no, it is definitely not correct but whatever.

My brother-in-law and sister-in-law do not bicycle, a subject I skirt very carefully.  They scuba dive, and they ride horses, but ixnay on the icycle-bay.  We were talking about vacations and in the manner of making pleasant lightweight talk I mentioned that I would love to see Costa Rica and maybe ride one of the famous Costa Rican zip lines through the jungle.

My brother-in-law said "oh, absolutely not."  I was surprised.  I asked why.  He said patiently that he was a neurosurgeon, and he worked trauma, and he saw a lot of people badly messed up by vacation adventures along the lines of zip-lining through jungles.

I asked carefully, "The bicyclists, did they get hurt because they were umm, running red lights?  Behaving dangerously?"

He looked totally surprised as if he had thought I was smarter than this.  He said "What?  No, never.  They're just going along and some car hits them.  Often the driver of the car is drunk."  He looked pensive as if he was searching backwards in time to give a totally complete answer.  "Once there was an occasion where they said the bicyclist had fallen inexplicably, turned into the path of the passing car so maybe on that one occasion it was the bicyclist but hard to know for sure."

So there it is.  As every bicyclist I have ever met suspects, it is not the way we ride that gets us killed.  It is the way the drivers drive, that gets the bicyclist killed.

I still hope to ride a zip-line in Costa Rica one day.  But I'd like to bike down there, not fly.
Posted by Chafed at 10:58 AM 1 comment:

A week or so back I was about a mile in to my trip home and I saw a green light ahead and stepped up the pace to a sprint.  Since there is no bicycle lane (but five car lanes, go figure) I was in the middle of a lane but travelling with the cars.

I got through the light and was feeling very very decent and immediately after there is another light and it is also green and I start trying to get this one also and this amazing thing happened.  I all of a sudden was pedaling crazy faster.  In a short miracle-esque moment, for reasons I don't get at all, my middle-aged body found something much younger in itself and my sprint doubled and although I am now heading up hill I am passing all the cars to my left and by the time I was pedaling through the (still green) light I felt like I was flying, or maybe even gliding because I felt as if it was all easy, I felt as if I could have gone as fast as I wanted.

Bob Dylan has this song I love, it's called "Let Me Die In My Footsteps."  My favorite version is on disc one of the three disc bootleg series.  He wrote it after seeing people digging massive underground bomb shelters for shelter in the event of a nuclear war.  Lately I have been thinking of this song when people tell me that bicycling is too dangerous, or when I see another article of a person being killed or badly injured by a car while the driver walks away without consequences.

I want to take my chances out here, on my bicycle, because everything that matters to me is out here.  The air that flows around me and smells of hot sun and white oleander and tall drying grasses.  The little ground squirrels that I ride by camped out by the side of the road nibbling tender green shoots.  The shadows that flicker through the trees.  The big white egret that flies overhead and the circling hawks that scan for long legged rabbits.  I love to see the same people pass me each day and they wave and smile and then go on to their own jobs or take the dog out for a walk.

Moments of flight are daily reminders that I cannot bear to lock myself away in a metal box from everything that matters to me, even if it is marginally safer in there. 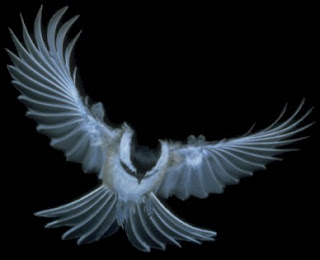